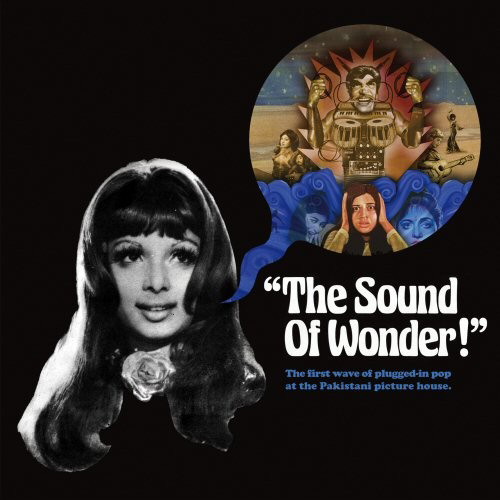 A great selection of Lollywood singles collected and remastered from the original tapes. Several weird instruments like moog synthesizers, early synths, Farfisa organs and fuzz guitars provide lots of ‘twang’ sounds. Percussion follows the real Punjabi rhythms, which sound rather exotic in combination with the rest, but the producers didn’t mind mixing this with a little bit of casio and rhythm box drums now and then, while always keeping an exotic complexity in the songs. We hear some brass and pastiches of an occasional orchestral arrangement. Another returning instrument is the accordion, even if the focus on it is only sporadically. In Bollywood it was the sisters Asha Bhosle (with her husband composer R.Burman) & Lata Mangeshkar who dominated the scene, Pakistan had her own counter-part with singer Naheed Akhtar, and her husband M.Ashraf who, like Burman, produced very clever scores for her singing.  Naheed has these almost hysterically high pitches in her singing. Rather fun making Bollywood examples, playing with ideas from Western music a bit, in these Pakistani tracks some go perhaps even further into odd ideas.  We hear more than once examples of  playing with nonsensical vocals #3-“Karye Pyar” in that way is incredible in its fun-scatting, but I should also mention #9-“Na Main Chini Na Japani” with its muppet show harsh voice or “Tarazanite” male as the liner notes say, -comic-book like- : the singing duet here are once more a theatre on its own. And let me also not forget #5-“Dilbar Dilbara” which besides other exotic very switching elements has a great vocal improvisation with jungle noises, like a Pakistani idea of Yma Sumac : very enjoyable). The fact that English liners are used more often in the Punjabi language makes this music even more attractive and charming to our western points of view.